Northwest Airways traffic managers C. G. Chatwick and Lucious Lobdell, visited Machesney Airport yesterday. The two men determined that they believe Rockford may one day be one of the most important air centers in the country.

The airport facilities in Chicago were congested and are not adequate for larger aircraft. Rockford located outside of the city was believed to be a logical place to help ease that congestion. 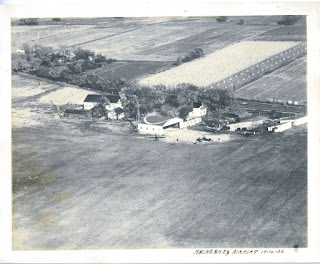 Context: Northwest Air
ways was looking to add Rockford as "flag" stop with the hopes it becoming a regular line stop on their Minneapolis to Chicago line. A "flag" stop meant that passing Northwest aircraft would fly low over the Machesney Airport while flying their route. If there was a passenger or cargo that needed to be picked up, Fred Machesney or his staff would literally flag down the passing aircraft to return to the field for a landing. Machesney and the Chamber of Commerce were making numerous improvements to the field at this time to improve night lighting and adding a beacon tower to help guide aircraft. The purpose of these improvements was to bring in the air mail which the Chamber hoped would boost the air-mindedness of the city as well as the local industry.

The city was also set to vote on a new tax that if approved would transfer ownership of the Airport from Machesney to the Park District. This would allow the city to apply for government funding to improve the airport. Machesney would be kept on as airport manager and retain rights to all revenue associated with airport facilities' such as fuel, maintenance, and a restaurant.

Popular posts from this blog

They Paved Paradise And Put Up A Parking Lot

February 14, 2020
It wasn’t that long ago that driving up North Second Street and glancing across this field provided entirely different scenery. Instead of an empty parking lot with cracked pavement and stale walls, the landscape featured a large grass field speckled with hangars and aircraft. The sound of engines and propellers beating the air dominated the air. In the early days, one would eagerly visit the airport on the weekend for a chance to take a ride with “Mac” and see Rockford from above for only $2.50. Fred Machesney was Rockford’s first professional pilot. Nearly 92 years ago, he came to Rockford with an airplane and dream to turn his passion for flying into a full time career. His passion, eye for safety, and his astute business sense quickly endeared him to the Chamber of Commerce and local business leaders. They embraced Machesney not only as a tool to help promote local business but as a partner that could help grow the local economy. The Chamber invested in him heavily and almost
1 comment
Read more

We are pioneers with a great idea...

November 21, 2019
“ " ... We are only pioneers, but we are pioneers with a great idea. Sometime in future centuries, the whole world will be revolutionized by that idea. Then it will know the value of the hope and the thrill we feel as our aero planes rise from the earth, pass through the clouds, and fly high in the clear upper air." -- Art “Bird Boy” Smith” In 1927 Frederick Machesney and his wife Mae moved North from the small farming town of Kewanee, Illinois to Rockford to begin the operation of a small regional airfield.  Over the course of the next fifty years Machesney's story would help to shape the development and thus the history of air travel in his local community and throughout the upper Midwest.  By the time he retired in the late 1970s, his field was recognized as the oldest existent single operator airport in the country.   Machesney was a skilled airman and a community leader, a man with a strong vision and the ambition to bring it to life.   In his fift
Post a Comment
Read more

February 24, 2020
“Forty-nine years ago I dug my first spade of ground here, and now I’m doing it again. But this’ll be longer lasting.” -- Fred Machesney, August 2nd, 1977. The headline from Rockford’s Morning Star-Register Republic paper from August 22nd, 1974 reads “Machesney Concedes to Progress”. As a researcher, I have read thousands of historical headlines over the years but none have had a personal impact on me more than the one listed above. When Machesney came to Rockford he ushered in a whole new era. For the first time in the history of the city, the airplane was now seen as a viable tool for commerce, recreation, and tourism. Business leaders could charter Machesney to take sales trips all over the region and be back home in time for dinner. Intrepid shoppers could take a shopping tour of Milwaukee and Chicago and be home the same day. Hundreds of aircraft from visiting cities and tours came through the airport during the year to promote aviation or conduct business. The possibiliti
Post a Comment
Read more